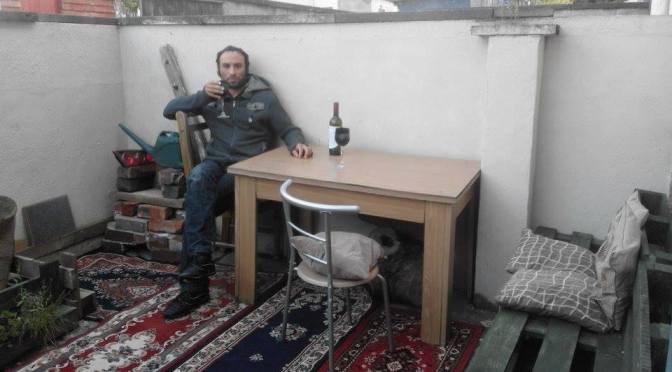 You must know Burnley to see it’s beauty,
The arches & the chimneys & Turf Moor,
The stately halls of Gawthorpe & Towneley,
The station & the bus-stop & mi door –
You can keep yer New York, Delhi & Rome,
At th’end o’ day, pal, there’s no place like home!

I breeze in, kiss mi Mum, butter some bread,
“A phone call, letter, we thought you were dead!”
“Mum, chasin’ destiny, I do great feats,
But you treat me like Abbey treat Keats!”
“Yer no son of mine get a proper job
Yer nowt but a no-good, bone idle slob!”
That same old twitterin’ in mi ear lobe,
I shit, shower, shave, raid mi Dad’s wardrobe…

“Oi thats mi shirt!” “Owdo Dad? “Owdo Son!
“How was London?” “Funny!”
…when we were done
Back at the ranch Mum’s cursing lotto numbers,
Dad’s snoring through his twelve bitter slumbers.

I was a six-year-child when first I felt
My soul entwining with the fairer sex,
Em’rald-eyed neighbor, who, one starry night
Said, “Have you ever kiss’d a lass before?”
“Of course!” I yelp’d, but grandmas do not count
& as we kiss’d she giggled at my lips
Closed shut & clamp’d by frigid innocence,
& said, “No, not like that, ya kiss like this…”
& show’d me how my mouth should act a fish.

Soon sprinting home, embarrass’d at the deed,
That never was repeated I believe,
For looking back, I was, in tender days
Contented with the kisses of grandmas
& nee-owwwwing with little Corgi Cars.

I learnt to swim right at the top o’ Rosegrove
& got a ten-meter badge for mi speedos,
I was seven or so, & two years later,
Went off wi’ mi class to the baths, n’ that.

So, as I’m sat down wi’ mi mates on the bus,
A poo started moving, a real turtle-head
& instead of rushing straight to the toilet
I thought that I’d get changed first, n’ that.

Then, lo & behold, on mi cubicle floor
That self-same poo plopp’d down all goo & stinkin,’
So mi teacher made me clean the buggar up,
Then sent me to sit in the stands, n’ that,

Where I waited mi teasing classmates with dread,
But never, to their credit, was one word said!

One night I saw her bra all pink & soft
& underneath, a bosom good & large,
& I began to kiss her on the neck,
Lips bobbing like a robin in the snow,
A dilettante before a women’s walls,
She commented upon my tenderness,
& led me to the lands of the undress’d,
Slipping a condom on me, & aspar
Her legs invite me in, a thrust or three,
& we were lost in rhythm, groans & gasps,
Until I came & there a man became,
Up standing before a full-length mirror
I gazed upon my body, athlete-lean,
& knew, right then, I was for fucking keen.

As a poignant time-lapse of the soul
Removes my child-hood street-by-street,
I brood upon an artificial meadow,
Where recently dilapidated terraces
Were brick-by-brick demolish’d, levell’d low.

Once, with life, these districts resounded,
But all is fading now, like fallen flies;
Grandmas, Grandads, Cousins, Aunties, Uncles –
A generation bounden in photographs –
Back then they laughed & cried like me & you.

My own street seems to have survived the cull –
But for how long? If others of its ilk
Were deemed ungodly, surely snobbish time
Shall banish mine beneath some grassy mound.

With a vigour that hordes the squirrel stores,
Fair sommer’s morning drives us to the moors,
Twix’ scatter’d wracks of industry’s decay
‘Tween Leeds & Liverpool made fair way,
Then to some heathen sentinel upwind.
Treading rough fields, forgotten roads behind,

Shelt’ring from northern breeze I lounge supine
On whale-back’d peak, thou solit’ry pennine,
All in the misty vale an entity;
Those auld terraced rows of Pendle City,
Whose galaxy of lights shatters the gloam,
With one of them the hearthstar of my home,

Forever, there, my spirit shall abide,
Fair feather’d by this precious countryside.

Nick, ‘diddliddling,’ my bestest friend,
Do you remember our eighteenth summer,
It felt that the good times would never end
& Barry Island the only bummer.

Saw… Bjork’s Debut, Newport’s Supersonics,
Peer Gynt down Stratford, Burnley rule Wembley,
Massive crowd in Brixton for the Manics
& that mad, May night near Monmouth, where we
Sat with the Roses and their album new,

“Don’t think it’s as good as the first,” said you.

We bus it home, the smash & grab complete
Walk up to Healy Wood, steep from the station
Chillin’out frequently, perched upon our ‘bench’

Gazin’ on Burnley, & Townley & Pendle
Then finally home to a perfect fit! 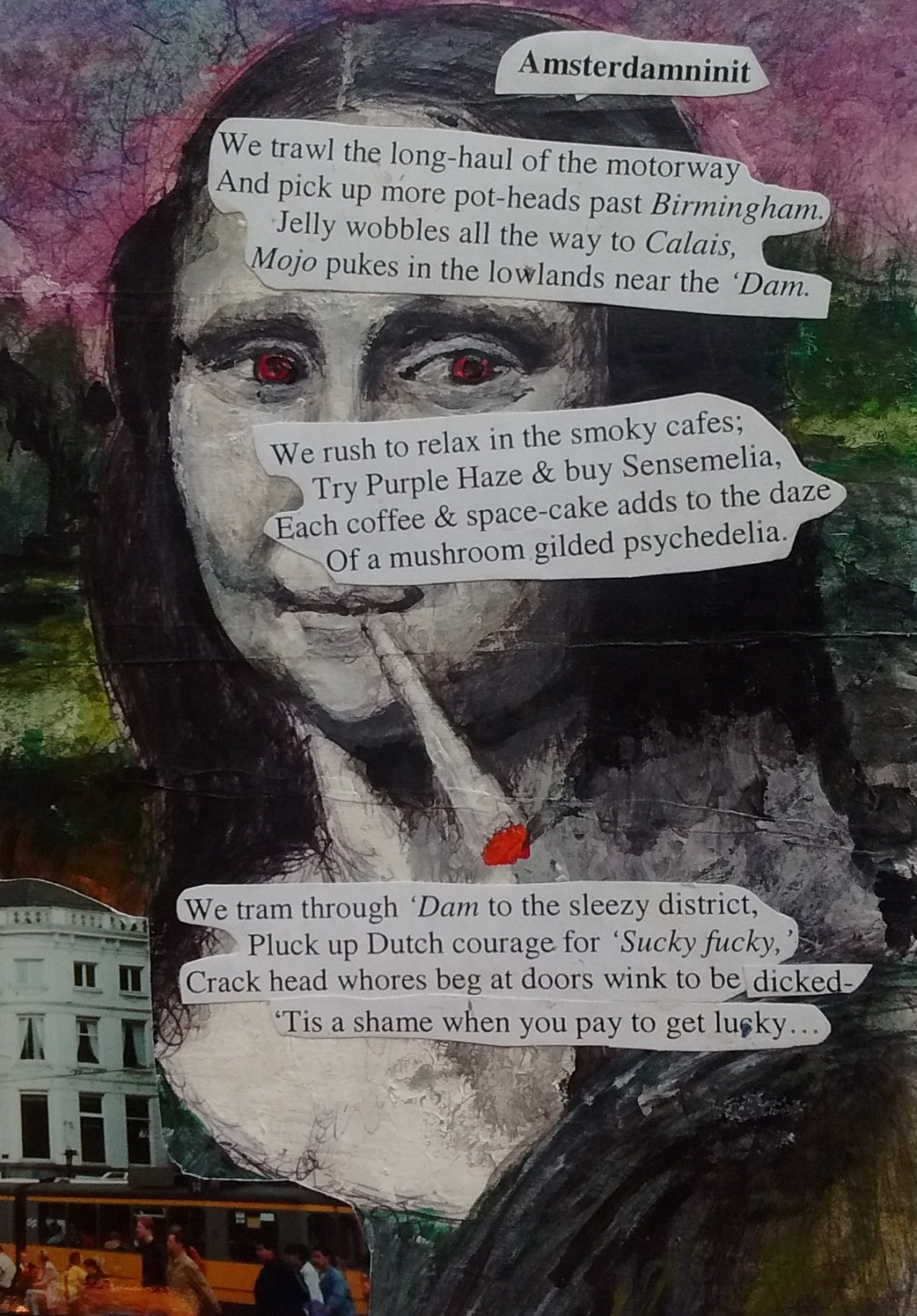 We trawl the long-haul of the motorway
& pick up more pot-heads past Birmingham,
Jelly wobbles on the waves to Calais,
Mojo pukes in the lowlands near the ‘Dam.

We rush to relax in the smoky cafes;
Try Purple Haze & buy Sensemelia,
Each stella & space-cake skanks up the daze
Of a mushroom-gilded psychedelia.

We tram through ‘Dam to the sleezy district,
Pluck up Dutch courage for ‘Sucky Fucky,’
Crack head whores slink at doors, wink’d to be pick’d-
Its a shame when you pay to get lucky…

Twyx Peterloo and Amritsar are passed a hundred years,
Islands of violent massacres, from oceans made of tears
They rise on rocks of dignity:- love, liberty and pride,
When desperate humanity despotic thugs defied,
When blunt and drunken yeomanry shed mothers’ blood, with child,
Saints of seditious tragedy society restyled,
Their murders ever worship’d in the wake of centuries,
Deep fervours hangin’ off the walls of holy galleries.

Not Shelley, even Ghandi, ever had our age foreseen,
When strange evolving tyranny still keep the laymen lean,
When opioids are funnel’d in to feed the phrenzied rich,
When soul restraining mortgages wounds struggle us to stitch,
While poverty’s addictions yet afflict the wider world,
The masses work is not yet done, let banners be unfurl’d.

Its High-Midnight… Dirtytheivinscouseland,
We swagger four abreast, wild North-West band,
Slip to the front of the coach-loaded queue,

“We’re extras in Hollyoaks!”
& slink through.

Fate plays a Soul Mate, our ships run aground…

I smile,
She smiles,
I touch her silky hand,
Storm-lightning crackles, at long last we’ve found,
The key to life, in this we understand
The machinations of the Gods above….

A kiss, & in one moment fall in love.
*… would you hold it against me 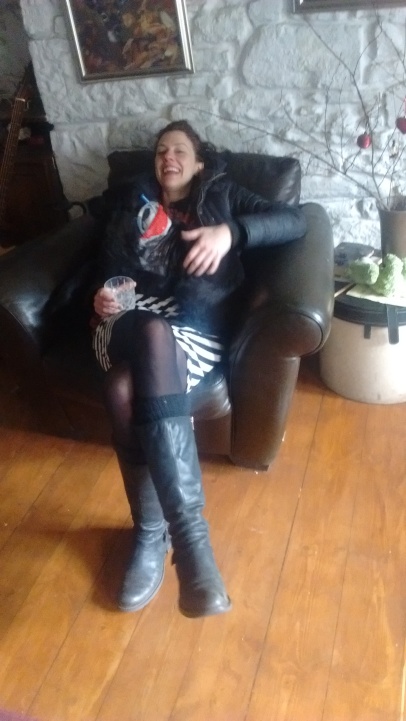 I’ll never pass another night
As sweet as ours was yesterday,
When all the world was set aright
& Angels play.

When like the running of a race
We reach’d the rope, there souls unpent;
& stroking trembling thighs, your face
Show’d passion spent!

Aye, lass, we set the world aright
While Angels play’d.

O knightly lights of heaven, star on star,
You never shone so beauteous, we are
The work, perhaps, of some astral being,
Or am I him now I am the all-seeing
Acolyte of the lost art of the skies,
Painting Orion & the Geminis,
Musing upon those long, eternal days
Soar shooting stars, trailblazing my amaze,
Mix’d with the phantom-llumin’d Milky Way
I saw, I swear, the Seraphim at play,
Dancing between the planetary kings;
Lord Jupiter & Saturn’s eerie rings,
Venus is beaming streaming dreams of love
Sweetheart come hither, thither the above. 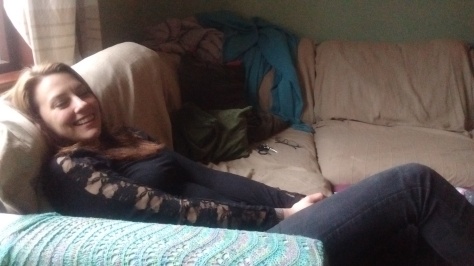 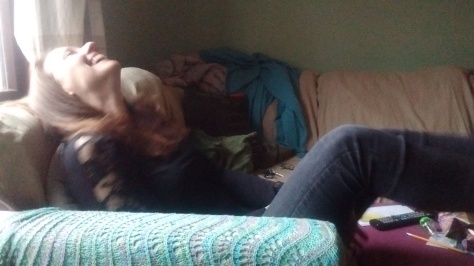